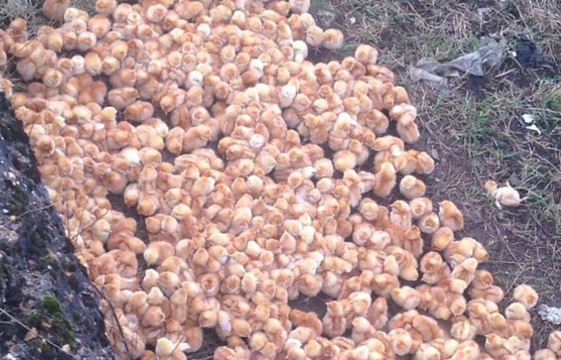 How chicks are treated in the egg industry

Earlier today the BBC ran a story about 1800 chicks who had been dumped in a field in Lincolnshire. Thirty of the chicks had died, a number of them had to be put down because they were dying of exposure, and the rest were bundled into boxes and collected by the breeder they belonged to.

The RSPCA expressed outrage over the incident, Inspector Justin Stubbs describing how he was “never going to get over the number and the vulnerability of these particular animals.”

What the article and Inspector Stubbs failed to mention is the fact that the chicks, once returned to the breeding unit, were probably going to be gassed or macerated – shredded to pieces by a blender-like machine – as are all male chicks born into the egg industry. Male chicks do not lay eggs and so they are useless to the industry, considered simply a waste product and killed shortly after birth.

“Instantaneous mechanical destruction” (maceration) is even listed as an approved method of killing chicks by the very organisation who today expressed such concern over the dumped baby birds – the RSPCA.

While all hatching plants must apparently have a macerator by law, the British Egg Industry Service claims that they are never used and that chicks are always “humanely gassed” to death. Of course there’s no difference at all between being gassed or macerated to death and the idea of humanely killing an animal is a grotesque oxymoron.

If you are quite rightly upset by the story of the chicks who were dumped in a field to die, then you should be equally disturbed by the fact that they are routinely gassed to death in staggering numbers every day in the egg industry.

And if you are disturbed by this cruel fact, as any moral person should be, then the only rational reaction is to stop funding such horrors by rejecting not just eggs but all animal products – as they are always the result of cruelty – by going vegan.

Vegan egg replacers are now widely available and the mass torture and slaughter of animals cannot be justified by your fleeting enjoyment of the taste of a fried egg and other animal products.