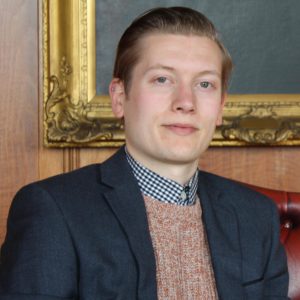 Could you tell us a bit about your background and what led you to become the activist you are today, Luke?

It was at school where I developed an interest in wildlife and animal protection. On days of cross country runs I would hide a pair of binoculars, pocket microscope and wildlife guide under my jumper, before bunking off and exploring the surrounding countryside. Returning head-to-toe in dirt after stalking deer through meadows or climbing trees to watch red kites proved the perfect cover! On a weekend I would jump on a bus and head up onto the moors. One day in the school library I discovered a book about animal rights, or lack thereof, and what I read really shocked me. This polar opposite between wild animals I have seen first hand and their dreadful treatment in laboratories, abattoirs and on hunting estates fuels my passion to defend those who cannot defend themselves.

Recently you’ve been campaigning to stop grouse shooting on Ilkley Moor. How has the campaign been going?

In 2008, Bradford Council signed a deed to allow grouse shooting to return to Ilkley Moor, the only municipal moorland in the UK where bloodsports are permitted. Since then the damage caused by the shoot creating a monoculture at the expense of biodiversity, including species of vegetation, mammals and birds, has become undeniable.

Last year Ban Bloodsports on Ilkley Moor (BBIM) was launched to support the moor being returned to those with an interest in its conservation and to remove the cruel, selfish shooting body which causes so much harm. We began as we meant to go on, with fourteen shoots abandoned due to campaigners peacefully standing in front of the guns, or prevented by our presence. Bradford Council’s Executive Committee also responded to our lobbying by prohibiting trapping of animals, including stoats and weasels. We now intend to take this forward with a complete ban.

Earlier this month you made a spectacular appearance during the Best in Show presentation at Crufts. How important do you think it is for animal activists to secure media attention through protests like yours?

Securing quality media coverage is central to any effective, modern and forward-thinking animal protection campaign. Crufts and The Kennel Club has a long history of ignoring concern about the welfare of dogs, which often suffer crippling genetic defects because of the focus on enhancing looks, not health. As a result of my teaming up with PETA to take the stage during Best in Show 2015, many newspapers across the world carried details of the agony endured by the hounds.

You study law – how has your legal training effected your activism, and how do you hope to use your knowledge in the future?

Training to become a lawyer has really put a cherry (and soy cream!) on top of my advocacy for animals. It taught me an almost military sense of discipline is vital to any campaigner who wants to get results, but also broadened my approach. As a teenager I saw animals in cages and on many occasions left whisking them away.

The passion which drove such actions still remains, but my knowledge of legal mechanisms allows me to close down whole operations, or prevent such operations starting up in the first place. A good example is when a team of us blocked a planning application to breed 2,000 beagles at a time to be poisoned in laboratory experiments. Many thousands of dogs have been spared from enduring living hell and the farm has still not got permission. In the future I would like to see more laws protecting animals, and those who inflict cruelty placed in cages instead.

Are there any individuals in the animal liberation movement who you find a particular inspiration?

Each person who gives an animal a voice is an inspiration to me. If each person gives an hour of their time to defending animals, those hours become days, months, years and collectively push forward change. However, there are a few people who have a special place.

Danny Flies of the Anti Dierproeven Coalitie (ADC) has taught me many valuable lessons. Outside the animal rights movement, the Pankhursts, MLK and Gandhi should get a mention too!

You’re very active online, organising protests and campaigns through Facebook and other social media platforms. How important a role does ‘digital activism’ play in the battle for animal rights?

Social media has added a new, important edge to animal protection. Information can be reached or distributed in minutes at the touch of a screen. Lobbying can be done in minutes, from your desk at work, or on the bus or train. The technology age has made campaigning accessible to almost everyone. However, it’s important to remember it has to be used in conjunction with other forms of protest. We could not have blocked shotguns on Ilkley Moor last summer with Facebook.

Finally, unless I’m mistaken, I think you used to be into punk! Are there any bands you particularly liked, and which musical artists currently fuel your activism?

Music synchronises every aspect of my life, be that whilst relaxing, writing reports or heading to campaign meetings. At the moment I’m very much into Joe Strummer and The Mescaleros, but fine-tuned with a bit of Bach!