As I was walking in York city centre yesterday, enjoying the sunny weather and the spectacular view of the Minster, a sign outside a restaurant made me do a double take.

The sign, which was proudly positioned outside Bennett’s Cafe and Bistro, read, “Mary had a little lamb…it tasted great with onion jam!”. 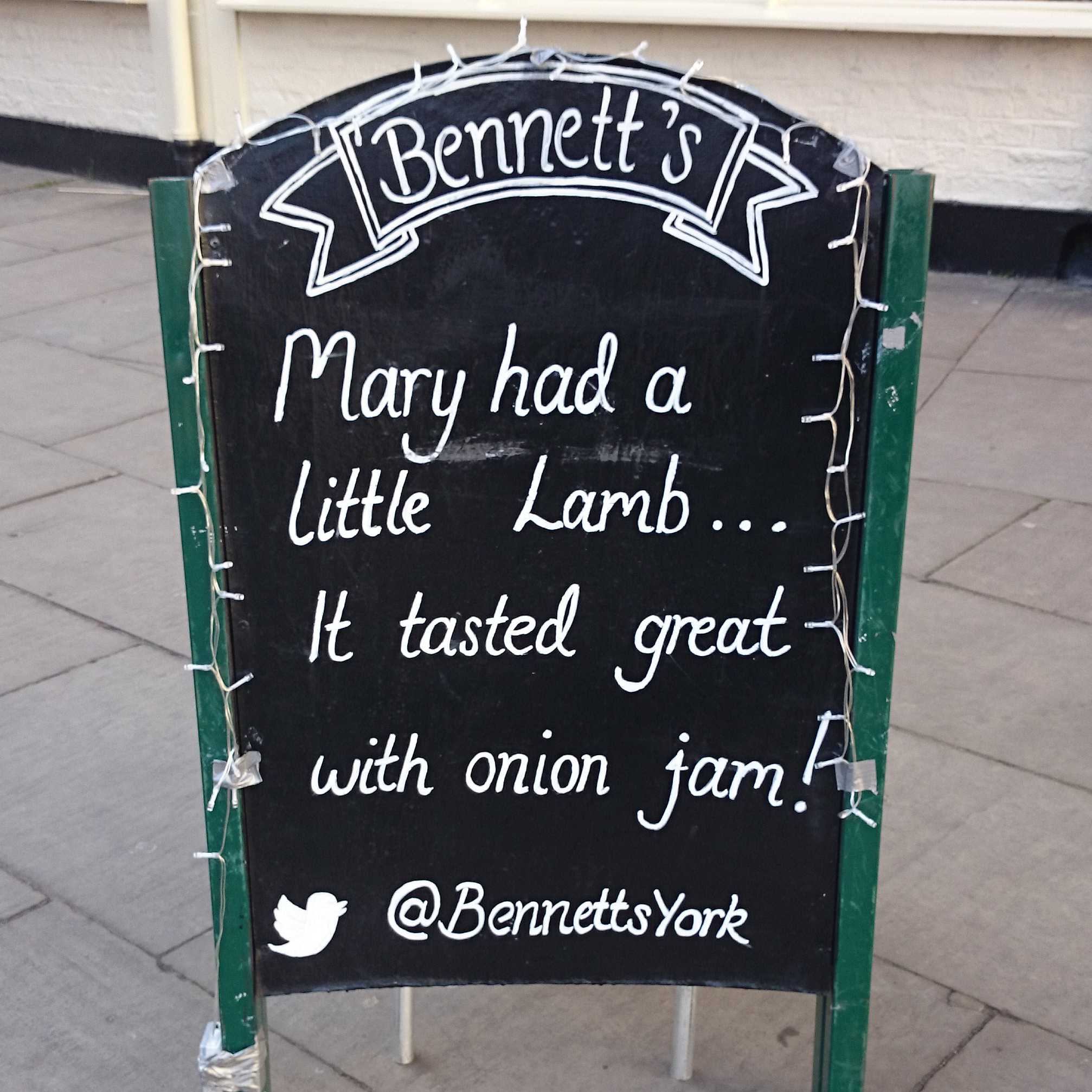 There was something about the shameless and flippant callousness of this ‘joke’ that I found particularly offensive. The warped and grotesque way in which the author had subverted an innocent nursery rhyme, degrading the image of Mary’s pet lamb and reducing a living, loving baby animal into a dead piece of meat for human consumption, disturbed me.

As a vegan I object to the killing of any animal. The murder of a baby animal though seems especially disgusting; a sentient being stolen from their mother after such a short life and killed purely to provide humans with something tasty to eat. What’s especially disturbing is that lambs are generally thought of as very cute animals; everyone has seen kids and their parents cooing over lambs whilst watching them playing and frolicking in fields during spring.

The ability to love one cute lamb whilst readily consuming the murdered corpse of another is a psychological phenomenon known as ‘cognitive dissonance’, a situation involving conflicting attitudes, beliefs or behaviours, as discussed in an Association For Psychological Science article titled The Meat Paradox: How Carnivores Think About Dinner.

Depressingly, to many humans, the life of an animal means nothing. Animals exist simply for humans to exploit, kill and consume. It’s ‘natural’ for humans to eat meat, they say; we ‘need’ to eat meat to be healthy – and, despite the strong evidence disproving such beliefs, they have no moral qualms about continuing to consume animal corpses. I assume the sign’s author believes such provably false arguments. This individual also, let’s not forget, has a strong financial motivation for engaging with the meat industry – their livelihood depends on selling dead animals to other meat eating customers in their bistro.

Many people are thoroughly detached and shielded from the reality of meat production and this is a contributing factor as to why some continue to eat it. 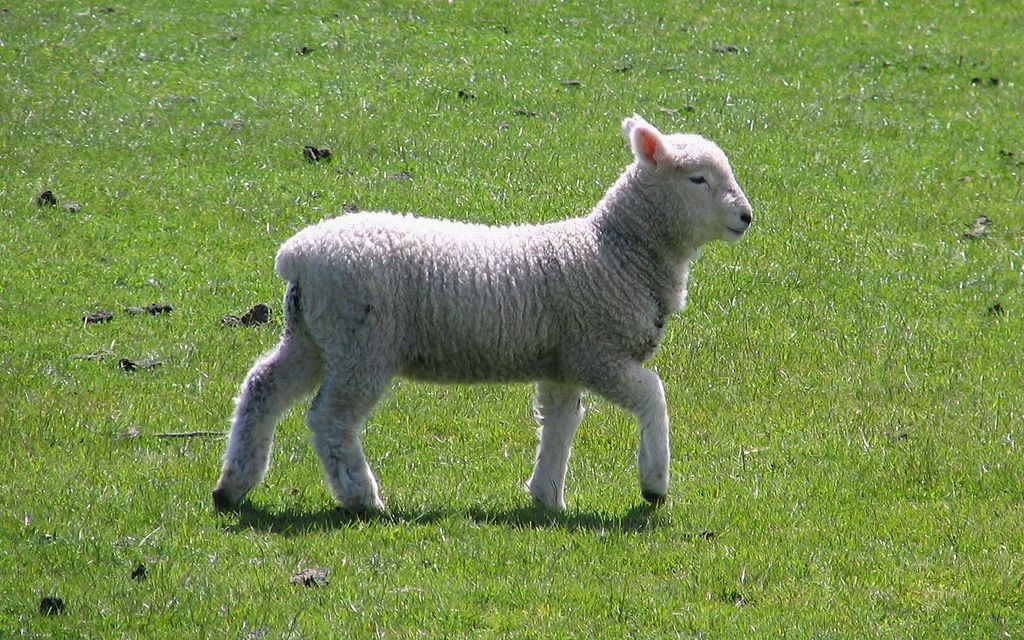 The reality of animal slaughter is unpleasant, distressing and violent and if meat eaters were aware of it (or faced up to their own wilful ignorance), some would undoubtedly renounce meat and become at least vegetarian.

Lambs are abducted from their mothers between the ages of six weeks and five months – grotesquely, the younger the lamb the more pale and tender their flesh, and the more tasty it is for human consumption. They are then transported to the slaughterhouse, a journey causing the sensitive animals stress and fear, if not outright terror.

Lambs are ‘unloaded’ from the van (a term taken from a slaughterhouse’s website and revealing how animals are seen as simply products and not feeling, sentient creatures) and ‘guided’ to a stunning area. They may be physically abused during their final journey, as numerous documented examples of horrendous animal treatment in slaughterhouses have shown. At the least the lambs will be stressed and fearful of their new and unfamiliar environment, but more likely terrified by the disturbing sounds and smells around them. They will suffer additional stress from the slaughterhouse workers’ attempts to ‘guide’ (meaning jostle and prod) them into moving along to their final destination.

The lambs are physically picked up and carried into the slaughterhouse. They may struggle to break free. In the slaughterhouse they are forcibly held down in a ‘stunning cradle’. Their final moments are lived in fear and distress. Manhandled and restrained, their pitiful existence is brought nearer to its end by a set of electric stunners held to the head and a strong electrical current discharged through skull and brain.

The lamb is not yet dead but unconscious – if he or she is lucky. Some animals remain conscious after a botched stunning. Whether conscious or unconscious, the still living lamb is hoisted up by their legs and their throat slit by a knife-wielding slaughterman. The moment of murder is euphemistically referred to in the industry as ‘sticking’. In Halal and Kosher slaughter, of course, lambs are not even stunned prior to ‘sticking’. Whether standard slaughter, Halal, or Kosher, blood gushes from the gaping wound and the lamb finally dies. 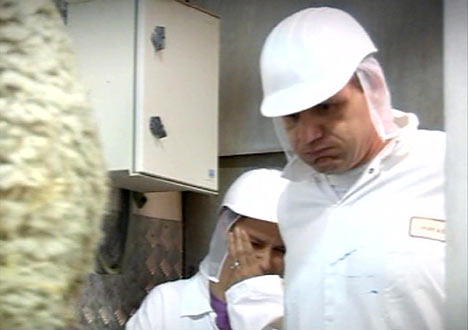 The lamb slaughter process is so disturbing that when it was televised during a Gordon Ramsay programme, PETA reported that they’d been contacted by people who’d watched the footage and were so horrified that they felt they had to request vegetarian starter packs. Ramsay, a man not known for his sensitivity, became visibly upset during the slaughter and described how “The last thing on my mind now is f*****g shepherd’s pie.” His wife was also in attendance at the killing and she too looked “pale and upset”. The footage was highly disturbing even though it represented a ‘best case scenario’ killing; many animals suffer far more at slaughterhouses the world over, every minute of every day, than the ones in Ramsay’s programme.

Sadly many people will still not be affected by reading or watching the slaughter process described above. There’s not really much I or any other vegan or vegetarian can say to them to change their minds. I’m thankful that I do not share their mentality but for the sake of the animals, I hope that one day their thinking will evolve and they will realise that the abuse and murder of animals for meat is totally unneccessary and morally unjustifiable.

When individuals like the author of the sign not only eat meat but actively, crudely and provocatively celebrate the killing of animals, however, I feel it is our responsibility as non-meat eaters to confront them and to let them know we are disgusted, and why.

I’ve tweeted my thoughts to the bistro (@BennettsYork) and have left a comment on their Facebook page. I will call out anyone who mocks the killing of sentient beings, whether lambs, sheep, pigs, cows, or any other species of animal that humans arrogantly think can be exploited and abused without condemnation or consequence.

Next ArticleInterview with London Vegan Actions' Jane and Phoebe Frampton