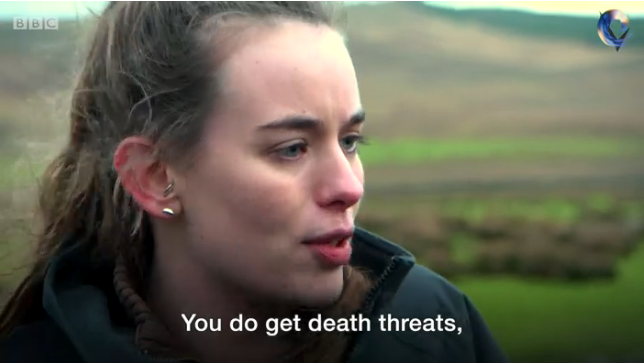 Alison Waugh, 20, featured in a BBC News video and article on January 29th headlined “Vegans call me murderer and rapist”. Ms Waugh appears in the video (embedded here) stating at the very beginning of the piece that “you do get death threats” with the accompanying article confirming that she “has received death threats due to her work”.

Ms Waugh’s claims were repeated in several other publications as fact, and kickstarted a whole series of sensationalist stories about farmers receiving death threats from vegans. Even The Vegan Society ran with the story and used Waugh’s claims as the basis for an article condemning vegans who make death threats, before bowing to pressure from disgusted vegans and amending the article to make it clear that the claims were allegations and that vegans are frequently on the receiving end of verbal and physical abuse.

The young farmer has now backtracked on her claims of receiving death threats, telling The Express that she has “not had people making specific death threats towards me“. Waugh evidently lied to the BBC, with her lies playing a fundamental role in launching the wave of stories which made very serious allegations about vegan activists without providing a single piece of evidence.

I wonder whether the BBC and other publications will amend their stories to make it clear that Waugh now admits she has not received any death threats? Somehow I doubt it.

We need to remain vigilant and treat such claims with extreme scepticism. Those with a vested interest in exploiting animals are feeling very threatened by the growing vegan movement. They will resort to smear campaigns and other underhand tactics to try and make vegans look bad, in order to protect their own dirty business and profits.