#Februdairy is a month long celebration of all things dairy and the dairy industry’s response to Veganuary. If you haven’t yet checked out the hashtag on social media then you really should, because it’s been totally hijacked by vegans.

The campaign is the brainchild of Dr Jude Capper, livestock sustainability consultant, Dairy Industry Woman Of The Year 2017, and prolific social media pro-dairy commenter who tweets under the handle @bovidiva.

Naturally I’ve been following the #Februdairy campaign closely on Twitter and I’ve heard numerous reports that she’s been liberally blocking people – including many vegans asking genuine questions about the dairy industry and who approached her in a polite and respectful manner. I haven’t once tweeted Dr Capper, nor have I included her Twitter handle in a single generic anti-dairy tweet, and at no point have I followed her account.

Imagine my surprise when I visited her page to discover that she’s blocked me! 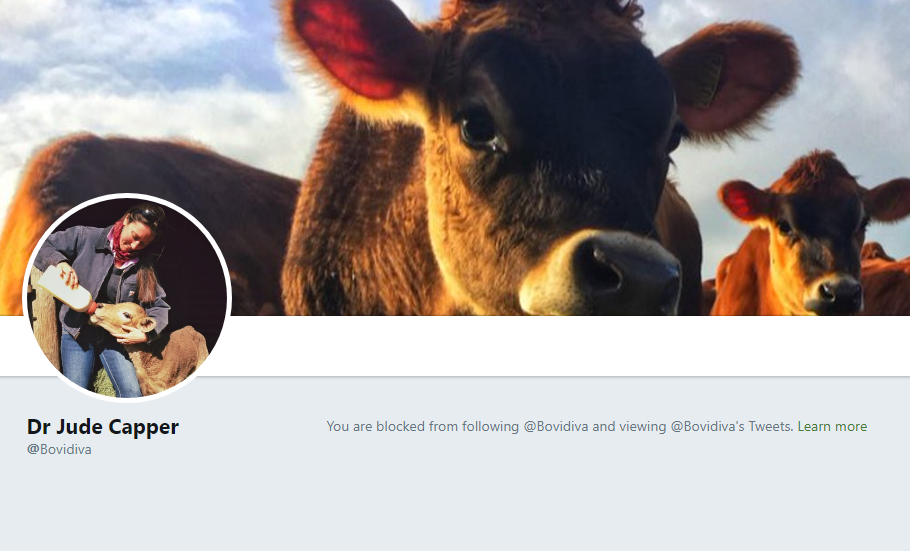 Hey Jude, why’ve you blocked me?

Yep – Dr Capper has blocked me, even though I’ve never tried to communicate with her in any way.

What makes the whole situation even funnier is that prior to the launch of #Februdairy, Capper drew up a list of recommendations for dairy farmers which advised them how best to engage with vegan activists online. Point five in ‘Jude’s top tips for engaging with activists online’, as published in Farmers Weekly magazine, was:

Don’t block people. If you block people online they think you are “rattled” or have something to hide. You can mute conversations of people who use unacceptable language or who are not interested in serious discussion. 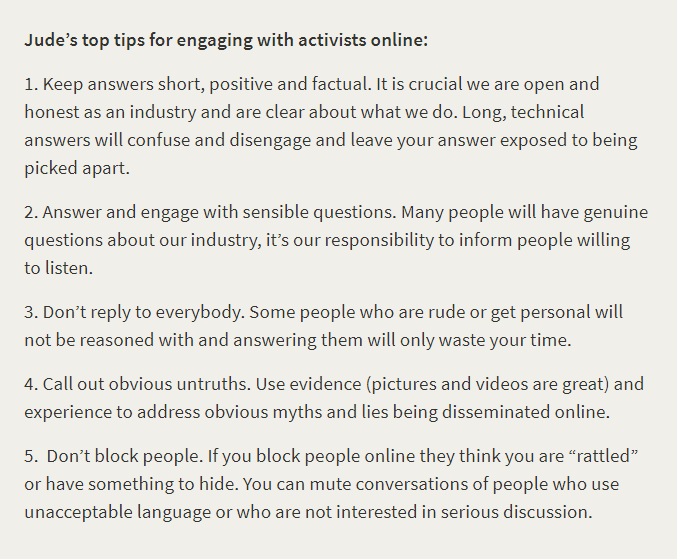 It’s hardly surprising that Capper is feeling rattled. The #Februdairy campaign that she personally orchestrated has spectacularly backfired, and given vegans an excellent additional platform on which to spread the horrible truths of the horrendous dairy industry and help persuade even more people to ditch cow milk and switch to cruelty free plant-based alternatives.

The horrible truths that Dr Capper and dairy farmers want to hide – and which they’ve entirely failed to conceal, despite the many photos they’ve posted of “happy” cows eating grass in a field – are the calves separated from their grieving mothers so that humans can steal their milk, the male calves shot dead at birth because they’re useless to the dairy industry, and the ‘spent’ dairy cows sent to the slaughterhouse to have a bolt smashed into their skulls and their throats severed because they’re no longer profitable.

Let’s make sure we all keep the pressure on the thoroughly alarmed dairy industry during the last two weeks of #Februdairy.